Kinky BootsThe Musical, filmed live at the Adelphi Theatre in the heart of London’s West End, isstrutting onto the big screen! With songs from Grammy and Tony award winning pop icon CyndiLauper, book by legendary Broadway playwright Harvey Fierstein (La Cage Aux Folles), and directionand choreography by Jerry Mitchell (Legally Blonde,Hairspray), the musical is based on the filmwritten by Geoff Deane and Tim Firth.Inspired by true events, this huge-hearted hit tells the story of two people with nothing in common–or so they think. Charlie (Killian Donnelly) is a factory owner struggling to save his family business,and Lola (Matt Henry) is a fabulous entertainer with a wildly exciting idea. With a little compassionand a lot of understanding, this unexpected pair learn to embrace their differences and create a lineof sturdy stilettos unlike any the world has ever seen! But in the end, their most sensationalachievement is their friendship. This unmissable musical theatre event celebrates a joyous story ofBritish grit transforming into a high-heeled hit as it takes you from the factory floor of Northamptonto the glamorous catwalks of Milan! 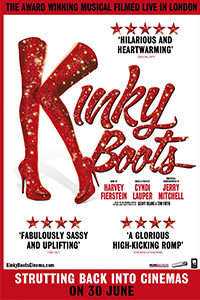 Rating:12A
12A CertificateFilms classified 12A have been deemed appropriate for viewers of twelve and over. However, they can also be seen by younger children - provided they are accompanied by an adult who has deemed the film appropriate viewing for that child. In such cases, IFCO strongly recommends that parents/guardians make informed decisions by accessing the consumer advice available on this website.
Advisory:moderate bad language, sex references, discriminatory terms
Country: United Kingdom, United States
Language: English
Released:25 June 2019
Duration: 135 min
Genres: Comedy Musical Event Cinema