Michel Poiccard is a petty Parisian criminal who aspires to be Humphrey Bogart. After he steals a car and shoots a police officer, his life starts to resemble the plots of American gangster films as he dodges cops and plans his escape from the law. His "girl" Patricia -- an American student --i s torn between following Michel and staying in Paris. Her final decision leads to a fatal conclusion and one of the most memorable endings in cinema. 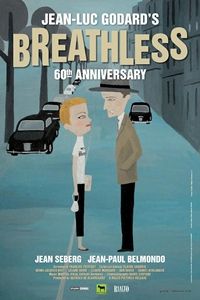 Rating:PG
Parental GuidanceGeneral viewing, but some scenes may be unsuitable for young children. A PG film should not unsettle a child aged around eight or older. Unaccompanied children of any age may watch, but parents are advised to consider whether the content may upset younger, or more sensitive, children.
Advisory:Mild sex references, language and violence
Country: France
Language: English, French
Released:28 May 2010
Duration: 90 min
Genres: Drama Suspense/Thriller