'If you could relive one memory from your life for eternity, what would it be?' Kore-eda (Shoplifters, Still Walking) asked this simple yet intriguing question in his funny and touching second feature film looking at life after death. Following his astonishing feature debut with the internationally acclaimed Maborosi, Hirokazu Kore-eda returns to center stage with a feature of inspired depth and beauty. After Life is a film centrifugally spun from a striking premise: If our passage to the afterlife demands that we erase all memories but one, what will that memory be? Countering its thematic richness with generous humor and a simple, uncluttered aesthetic, After Life is a film to treasure, savor and revere. In an enigmatic way station suspended somewhere between Heaven and Earth, the newly-dead register their arrival and await their transfer to the great beyond. Shortly after arrival, a team of congenial guides explains to the dead that their ascent to Heaven demands the eradication of all memories but one, and they have a week to select that one defining moment. But as the dead and their guides quickly discover, reducing life's meaning to a single event is nearly impossible. As facilitators of this process, the guides urge a decision, then set about directing the cinematic reenactments of the memories selected. Inspired by his grandfather's battle with Alzheimer's, Kore-eda returns to his roots as a documentarian, sculpting his narrative from the recollections of hundreds of elderly Japanese (some of whom join the cast of the film). Their stories reveal not only individual joys and fears but serve as a vital compendium of postwar Japanese society and a striking testimony to the fragility and fluidity of memory. Winner FIPRESCI Prize San Sebastian International Film Festival 1998 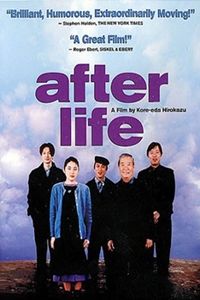